Edinburgh. Edinburgh. Edinburgh. Say that three times fast, pronouncing the Scottish capital’s name just as the natives do (nowhere near “burg” and slightly clipped away from the longer “burra”). If only the incantation were like the one in Beetlejuice (Tim Burton, 1988), except it would transport me. When my sister and I came to Edinburgh, after a few days in Glasgow and before making our way to London in December 2006, my expectations were as high as the Castle, which sits above the city as if it were a crown or the cherry atop a hot fudge sundae. In the city center, it’s virtually impossible to look up without seeing Edinburgh Castle. This undoubtedly leaves a rather picturesque impression on the mind, long after you have gone.

Running tangential to my rampant Anglophilia (and the equivalent for Ireland, whatever its name may be), is my even more ravenous hunger for all things Scottish. I cannot pinpoint exactly where and when it began. I’m sure members of my family would tell you that it started consuming me when I first rented on VHS the new, much buzzed-about indie hit Trainspotting (Danny Boyle, 1996) at the tender age of ten. (What can I say? I have two of the most permissible parents on the planet when it comes to thematic content in film.) However, I don’t think that is entirely true, for I must have already had an intense interest in Scotland to have even heard of such a film about a cadre of heroin addicts and to seek it out for screening. But truth be told, it lay the groundwork for my passionate exploration of Scotland, through movies, music, history, literature, politics, comedy, etc., which continues unabated to this day. Trainspotting represents for me one of my most formative experiences of cinephilia, and thus warrants its own future post. But suffice it to say that when I arrived in Edinburgh, I wanted to see how it matched up with the hundreds of Trainspotting viewings I had enjoyed already.

I wasn’t expecting much overlap in scenery, actually. Trainspotting had been shot mostly in Glasgow. I remember a Glaswegian telling me in an anonymous online chatroom (remember those? how quaint!) that the Taxi Driver-themed nightclub where Mark Renton (Ewan McGregor) meets Diane (Kelly Macdonald) is—or at least, was—located in his city. I’m not sure that the filmmakers even used Irvine Welsh’s inspired setting, Leith, when they shot the picture. And in retrospect, I regret not riding the bus out there, especially after having read much of the Trainspotting author’s oeuvre set in the (once-)depressed municipal port north of the city.

Not being big shoppers, my sister and I knew that we still had to see Princes Street, the main thoroughfare in Edinburgh, which divides New Town from the Old (and vice versa). In the opening scene of Trainspotting, Renton and his best bud Spud (Ewen Bremner) run down this avenue, cops in hot pursuit. Iggy Pop’s “Lust for Life” provides the propulsive score to the action. Eventually, Renton’s voice-over intones why people “choose life” and why he explicitly hasn’t. These audio and visual ingredients are iconic on their own, but when mixed together, they ensure the film’s cult status right out of the gate. Which is exactly why I had to make a pilgrimage to Princes Street (it’s not hard to do, the train station’s right there). This scene is practically the only one shot in Edinburgh; they couldn’t easily double Glasgow when introducing the city with this kind of iconic shorthand.

There aren’t many films set—let alone shot—in Edinburgh, as film industries favor the more populous Glasgow for its urban Scottish stories (don’t get me started on Highland film settings). Shallow Grave (Danny Boyle, 1994) and One Day (Lone Scherfig, 2011) are notable exceptions, and they both capture Edinburgh as the beautiful, historic, lived-in city that I dreamily wandered around for days. But 16 Years of Alcohol (Richard Jobson, 2003) and Driving Lessons (Jeremy Brock, 2006) provide more specialized glimpses of the capital city that I recognize from personal experience.

The first, billed on a poster as “Trainspotting Meets A Clockwork Orange” (it’s like neither of those two), has a memorable scene set on Calton Hill, where the reformed skinhead protagonist (played by Kevin McKidd, of Trainspotting fame) seeks redemption. Standing on a hillside walkway, where I snapped the above picture, I remember feeling overjoyed at the sight of Calton Hill in the faraway distance, its unfinished early 19th century Parthenon and Nelson Monument (the tower that looks like an upside down telescope) presiding over the city. I recalled both landmark structures from my viewing of the little-seen 16 Years of Alcohol, which underscores their deeply symbolic position to quiet but melodramatic effect. The film also has many scenes set in closes, or steep streets that connect the Royal Mile to streets down below. Although I remember giddily exploring one or two of these dark passageways, I regret not taking a haunted tour of Edinburgh that used them as occasions to tell macabre stories about the city’s past.

Driving Lessons takes place mostly in England, but the wacky actress Julie Walters dupes her assistant Rupert Grint into chauffeuring her all the way to Edinburgh for a speaking engagement. Much of the Edinburgh action hews closely to the area around Princes Street, but the characters stop in at a pawn shop on the Royal Mile, not far from the chintzy souvenir shop where I purchased a Royal Standard of Scotland (you know, the golden flag with a red lion). I later found out it wasn’t the real thing (the lion on my flag didn’t have a blue tongue, probably because the unauthorized production and display of the royal family’s rampart is punishable by law). Whenever I see Driving Lessons, I’m reminded of this… fact. And until fairly recently, the flag’s inauthenticity always made me feel dejected whenever I looked up at it, hanging on the wall above my bed. So I finally replaced it with the Scottish national flag, the Saltire (or St. Andrew’s Cross), which my sister gifted me for my birthday a few weeks ago. Her message? “Let your Scottish freak flag fly!”

No film could prepare me for Edinburgh. When we first arrived, the air smelled delicious, of smoked hot dogs. Later, when my sister and I sampled different varieties of Scotch whisky at Edinburgh Castle, we realized the city’s aroma was the byproduct of numerous nearby distilleries. To this day, when I think of Edinburgh and inevitably yearn to return there (specifically to live), I can’t help but smell it. Even if the whisky burned my throat. 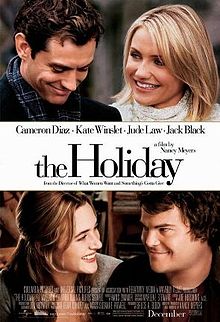 I woke up one morning in Edinburgh with a sore throat, but it wasn’t because of the whisky. I had stupidly gone to sleep with damp hair the night before. At the time, it spoiled my memory of the previous night, which came to me as an utter surprise. Not knowing how to spend the evening after dinner (my sister and I aren’t big on bars or nightclubs), I allowed her to drag me to see The Holiday (Nancy Meyers, 2006). As you might recall, she’s really into romantic comedies, and I am not. In any case, I rather enjoyed the film and its romantic sense of adventure. It made me wish I could meet a sensitive and sexy Scot while on my travels, just as Cameron Diaz’s unemotional-to-a-fault workaholic falls into bed with the mysterious cad-turned-superdad played by Jude Law. Oh well. Such romantic fantasies are just made for the screen (pun intended). After all, my real love affair was with Edinburgh, who made such a euphoric impact on all of my senses, including, most of all, my sense of self. This is going to sound really cheesy, but it’s true. Since I had romanticized the city for years, I hoped against hope that I would fall in love with the place and never want to leave. This dream did indeed come true, but I also had to make the painful realization that the days I spent in Edinburgh were not nearly sufficient enough for me to really get to know the city. Instead, Edinburgh is like a soul mate you meet all-too-briefly before you go your separate ways. No matter where I am or what I do, I can’t shake the memory of Edinburgh’s cheeky smile, traumatic and triumphant life experiences, and a self-confidence that set me at ease. I can’t wait for us to meet again.

Up next: another entry of Movie Travel Diary. But until then, tell me about your movie-related experiences in Edinburgh. Which film(s) best represents the Edinburgh you know from your own travels?