My father and I take 6-mile-long walks around the neighborhood several times a week. We’re out and about with the family dog Samson, a German Shepherd/Welsh Corgi hybrid (so cute, but he’s the star of his own story), for around 120 minutes at a time. That’s a lot of time to contemplate what’s for dinner, life in the universe(s), and cinema history.

Today, we did something we’ve never done before: we played a version of the once-popular party game Six Degrees of Kevin Bacon. I argued that it’s not worthwhile using Bacon anymore because really anyone is just as possible–if not more relevant. To support this idea, I boasted about how I amused several friends at the dining hall one night back in college with my skills in connecting Ewan McGregor to anyone and vice versa. Convinced, Dad indulged me with many challenges, some of which were easy (Marilyn Monroe and Elizabeth Taylor) and others which were not (Jill Clayburgh and Bette Davis). Once we’d had enough, I suggested we connect all of the films nominated for Best Picture at this Sunday’s Academy Awards. Admittedly, just remembering which movies were on the shortlist was difficult, especially since we didn’t have any pen or paper to jot the names down. Hell, choosing where to start wasn’t easy either, but I opted for the one with the smallest cast. My swirling thinking eventually gave Dad a headache, and just when I didn’t think I would solve the maze before we got home (I must have started about 25 to 30 minutes before the end of our walk), I made a breakthrough.

I had noticed that there are multiple actors who appear in at least two Best Picture nominees (I’m looking at you, Viola Davis, Jessica Chastain, and Brad Pitt), but in my pursuit of the trivial, I realized John Goodman and Tom Hiddleston of all people can make the same claim, too. Because of these circumstances, you might think that the map I’ve “drawn” below is rather easy. And it is. If anything, we might now ask ourselves what it means to have supposedly the best films of year littered with faces that pop up across the board. I should also state that I used rules of the game that allow play across performers and therefore prohibit connections through off-screen relationships or filmmaking roles other than acting (which means I couldn’t use Woody Allen’s directing Emily Mortimer in Match Point [2005] to connect Midnight in Paris to Hugo). And I sought to never repeat a name (hence the exclusion of Ocean’s Eleven [Steven Soderbergh, 2001] in the process of connecting Moneyball to The Descendants). Having said all this, I would be interested to hear suggestions for connecting Midnight in Paris and Hugo more economically than I have done.

Since I’m no graphic artist, I apologize that I couldn’t draw a flowchart that would make this more fun to read. But here goes: 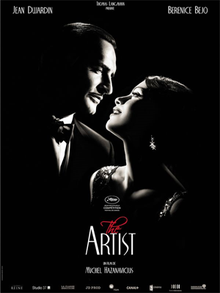 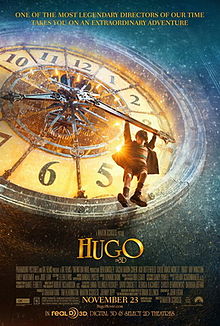 If that’s not too much, you can then connect Hugo back to The Artist in the following way:
… Moretz, who’s in
9.) Hugo with Ben Kingsley, who’s in
Sneakers (Phil Alden Robinson, 1992) with Robert Redford, who’s in
All the President’s Men (Alan J. Pakula, 1976) with Dustin Hoffman, who’s in
Rain Man (Barry Levinson, 1988) with Valeria Golino, who’s in
Cash (Eric Besnard, 2008) with Jean Dujardin, who’s in
1.) The Artist

For the record, I created this map without clicking through Internet Movie Database, although I must admit that I checked it once: to look at the names on the cast list of Hugo in order to find my way back to The Artist.

Addendum: Over a video chat with my sister, we were able to piece together a shortcut from Hugo to The Artist. While brainstorming an approach from the opposite direction, I thought of Missi Pyle and pictured her in Charlie and the Chocolate Factory, which my sister alerted me also features Christopher Lee, who’s in Hugo.

…. Moretz, who’s in
9.) Hugo with Christopher Lee, who’s in
Charlie and the Chocolate Factory (Tim Burton, 2005) with Missi Pyle, who’s in
The Artist

4 thoughts on “Jump Cut: A Circuitous Route to Find the Best Picture”