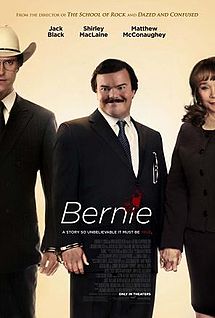 Director Richard Linklater originally made a name for himself with film-stories set in his native Texas, everything from Slacker (1991) and Dazed and Confused (1993) to SubUrbia(1996) and The Newton Boys (1998). Even his beloved European-set Before Sunrise “franchise” has a Texas connection: Ethan Hawke’s writer, who in some small part might be based on Linklater himself, also hails from the southwestern state. The comedic true crime story Bernie (2011) returns Linklater to Texas for the first time since 2006’s Fast Food Nation and reunites him with the star of 2003’s The School of Rock, Jack Black, as well as early muse Matthew McConaughey.

I passed on Bernie when the film hit select theaters in late April of this year, not because I wasn’t interested in the story of a much fawned-over gay assistant funeral director shooting dead his 81-year-old multi-millionaire companion, the small town’s wicked witch, but because I already knew all of its plot details. I had read a New York Times Magazine article by Joe Rhodes, the nephew of the victim Mrs. Marjorie Nugent, and learned that for nine months Bernie kept up the pretense that Marjorie, stuffed in a freezer, was alive while he spent millions of her dollars, “generously” gifting people all over town. Despite Bernie’s, uh, indiscretions, Rhodes, like practically everyone involved, seems to find him the more sympathetic character. It’s a fascinating story, but I wonder if Bernie‘s storytelling format was the best choice. In any case, I heartily recommend Rhodes’s examination of the events leading up to and following Bernie Tiede’s killing Mrs. Nugent that, as the movie’s tagline says, constitutes a story “so unbelievable it must be true.” You just might want to see the movie first, because it does spoil the plot. As does this review of the film Bernie.

East Texas. The date? I’m not quite sure, as the true events took place in the 1990s. But while the production and costume design seem to indicate this period, Bernie (played by Jack Black) has an iPhone, which wasn’t released until summer 2007. So what can you do? Anyway, as the assistant funeral director in Carthage (approximately 7,000 inhabitants strong), Bernie is well-known for his attentive care of the recently bereaved (particularly elderly widows), and his boss especially values his employee’s superb up-selling skills. Bernie manages to thaw Marjorie’s (Shirley MacLaine) cold, miserly heart following his supervision of her bank-owning husband’s funeral (which actually took place in 1990). From that point on, they are virtually inseparable. They travel everywhere together, go on extensive shopping sprees, and eat at the finest restaurants as well as the local, rustic watering holes. (Hilariously, in one scene, Marjorie pesters Bernie to help her pick out a nice dress for dinner, forcing him to stop whatever he was doing at the time he received her call. Then, in an unfussy cut, it’s revealed that they’re only dining at a chintzy Mexican cantina in town). People speculate that Bernie has to be supplying sexual favors in order to receive that kind of lavish, undivided attention from Marjorie, who has alienated everyone who has ever come in her path, including her family members. Marjorie becomes so attached to Bernie that she demands to know where he is and what he is doing at every hour. In his defense, the word that Bernie constantly uses to describe Marjorie’s dependency on him is “possessive.” Then, in an impulsive move one day in 1996 (again, according to actual events), Bernie takes the shotgun for killing pesky armadillos and shoots Marjorie in the back four times, the symbolism not lost on the audience. Immediately remorseful, Bernie prays, but instead of alerting the police, he packs her into the freezer in the garage and goes about life as if she is merely the house-bound victim of a series of strokes. No one else likes to see or talk to her, anyway—except for her nosy stockbroker (Richard Robichaux), who’s onto Bernie’s misdeeds.

No matter how overly prepared I was to watch Bernie, I never expected that Linklater, who co-wrote the script with Texas Monthly crime reporter Skip Hollandsworth, would choose to frame the narrative as a docudrama, complete with historical reenactments starring Black, McConaughey, and MacLaine; numerous talking head interviews with real townspeople; and title-cards that read “Who is Bernie?” and “Was Bernie gay?” One might even be tempted to label the film a mockumentary, for it gently pokes fun at the residents’ bigotry and simple-mindedness. For instance, knowing Bernie to be an outstanding Christian for all his involvement in church activities, including orgiastically singing hymns and paying for a new prayer wing (with Marjorie’s money, of course), the people of Carthage refuse to believe Bernie killed the town’s least popular resident—even after he confesses to the crime once Marjorie’s financial adviser and family members start investigating his trail of lies. In fact, Bernie is so well-liked for his caring and easygoing demeanor that District Attorney Danny Buck Davidson (McConaughey, made comically un-handsome and outfitted with shirts—baggy ones, at that—big, round eyeglasses, and short, matted hair) successfully motions for Bernie’s murder trial to be moved 50 miles away to ensure that selected jurors are unbiased. In the end, he’s sentenced to life in prison, and according to Rhodes, he will be eligible for parole in 2027, when he is sixty-nine-years-old.

In exploring the surreal circumstances of Bernie and Marjorie’s relationship, the film regrettably relies too much on the testimonials of real Carthagians. It’s unclear if their lines are scripted, improvised, or unrehearsed. But the warm, burnt cinematography by Dick Pope seamlessly blends their one-sided conversations (with the documentary lens) with the scenes featuring the trio of the top-lining professional actors and their supporting cast. In other words, despite the fragmented structure of Bernie, Carthage comes across as a fully realized universe and lived-in place, even if Black, McConaughey, and MacLaine barely share any screen-time with the “real” people. However, though all three turn in captivating performances (particularly Black, who dials his trademark zaniness way down), I couldn’t help wishing that Linklater and co. had given the stars more to do. Earlier, I labeled their scenes “historical reenactments” because they mostly just serve the narrative as related by practically everyone in town. They seemingly act out scenes in order to support the Carthagians’ arguments about how gregarious a fellow Bernie was (cue Jack Black, in character, directing and performing in a high school production of The Music Man) and how downright nasty Marjorie was (see MacLaine throw a Hispanic family’s mortgage loan in the garbage as soon as they leave the bank).

Admittedly, one of the best scenes integrates the documentary and comedy-drama bits and, unsurprisingly, unfolds at the very end, allowing the story to come full-circle: one of Bernie’s real-life apologists visits him in jail, still in denial, and reiterates her request that he sing at her own funeral, whenever it is. Touched, Bernie tries to tell her that it’s impossible, as he doubts he’ll ever get permission. But she’s just not hearing him. When their time together is forced to close, the camera follows Bernie contentedly walk back toward his cell, eventually staying put to capture his receding presence—and slightly sashaying hips. As if to say again, “Can you believe this man is a convicted murderer?” This isn’t to say that the filmmakers think Bernie is innocent. He is most definitely not. Having formed my first impression of Bernie Tiede based on Joe Rhodes’s interpretation of his aunt’s life partner-turned-killer, I can see that the filmmakers find him just as sympathetic as Rhodes does. We’re meant to perceive Bernie as simply a good person who snapped and did a very bad thing. More tellingly, to some degree, I think the storytelling structure of Bernie precludes the spectator from strongly identifying with Marjorie. That is, representing the real townspeople’s overwhelmingly sentimental observations about Bernie does very little to redeem Marjorie; no one comes to bat for her. To add insult to injury, MacLaine’s limited screen presence means her character isn’t as fleshed out as Jack Black’s Bernie, leading my dad to comment that her bickering Marjorie recalls her performance as a grumpy and difficult First Lady to Nicolas Cage’s secret serviceman in Guarding Tess (Hugh Wilson, 1994).

It was only during my Google search for images to accompany this article that I made the connection that Bernie has a premise not-too-dissimilar from the one guiding Weekend at Bernie’s (Ted Kotcheff, 1989), wherein Andrew McCarthy and Jonathan Silverman live large at their horrible boss’s vacation home after the titular schmuck (Terry Kiser) dies unexpectedly during their stay; like Bernie, the pathetic stooges pretend their employer is still alive and try to outrun the cops (among others). But whereas Weekend at Bernie’s takes a slapstick approach to defiling the sanctity of the human corpse, Bernie explores the all-too-realness of this possibility. It’s an intriguing little story, and it’s shocking that Carthage still sings his praises. Just what exactly is in the well-water over there? I wonder how the town’s residents responded to the film, too.

One thought on “Quick Edit: How Do You Solve a Problem Like Bernie?”