I hate to sound like a broken record, but I’m not one for inspirational teacher/coach movies. For starters, these films usually revolve around a coach searching for redemption, beginning with Gene Hackman’s Norman Dale in Hoosiers (David Anspaugh, 1986). As the Ur-text of this kind of film, Hoosiers popularized the subgenre. Other notable entries in the canon include The Mighty Ducks (Stephen Herek, 1992), Cool Runnings (Jon Turteltaub, 1993), We Are Marshall (McG, 2006), and Glory Road (James Gartner, 2006). There are some exceptions to the trope of the white male savior coach, though: Remember the Titans (Boaz Yakin, 2000), starring Denzel Washington, who later went on to direct himself as an inspirational college professor in The Great Debaters (2007), and Coach Carter (Thomas Carter, 2005) both cast African-American actors as the students’ tough but fair role models. Even though a sports backdrop predominates in this field, there are films that are about teachers effecting change in the classroom, some more successfully than others. Thanks to Dead Poets Society (Peter Weir, 1989), we all learned to quote Walt Whitman and seize the day. The Emperor’s Club (Michael Hoffman, 2002), also set at a tony boarding school, is a bit of an outlier, for it exposes how an honorable classics teacher failed to impart the importance of living a life with integrity on one of his most difficult students. Then, of course, there are the two most recognizable woman-centered inspirational teacher films: Dangerous Minds (John N. Smith, 1995) and its apparent remake Freedom Writers (Richard LaGravenese, 2007). Remember “Gangsta’s Paradise”? 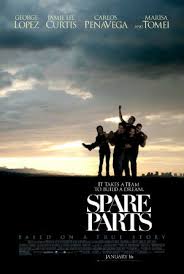 However, I’d like to recommend a new and welcome entry in the subgenre: this year’s Spare Parts, directed by Sean McNamara and written by Elissa Matsueda. (Did you think I was going to say McFarland, USA?) Based on Joshua Davis’s 2005 WIRED magazine article, “La Vida Robot,” it tells the story of four Mexican-American teenagers living in Phoenix who, with a little guidance from their teacher, enter a prestigious underwater engineering competition and blow everyone away with their expertly designed ROV (remote-operated vehicle), constructed for only $800—a tenth of their competitors’ average operating budget. Fronted by funnyman George Lopez, Spare Parts resembles Stand and Deliver (Ramón Menéndez, 1988) in that a Mexican-American teacher guides the at-risk students in developing practical STEM-related skills. However, Spare Parts also recalls Race the Sun (Charles T. Kanganis, 1996) and October Sky (Joe Johnston, 1999), simply because of its emphasis on the students’ coming-of-age while learning to work as a team to build mechanical vehicles or rockets. (It is also worth mentioning that in Spare Parts’s closest antecedents, the inspiring teachers were both women.)

Here, the real-life robotics club mentors Allan Cameron and Fredi Lajvardi, both science teachers at Carl Hayden Community High School in West Phoenix, combine to form Dr. Fredi Cameron (George Lopez), an engineer who has difficulty keeping a job longer than three months due to some emotional trauma that he experienced years ago (I won’t spoil what it is, though you can probably already guess). Desperate, he takes a long-term substitute-teaching job, and the persistent Oscar Vazquez (Carlos PenaVega), a member of the local ROTC, convinces him to sponsor the school’s robotics club. Having been denied the opportunity to serve in the armed forces based on his undocumented immigration status, Oscar believes competing in the underwater robotics competition is his ticket to college. Rounding out the group are Cristian Arcega (David Del Rio), the bullied brainiac; Lorenzo Santillan (José Julián), the trouble-making mechanics-whizz; and Luis Aranda (Oscar Javier Gutierrez II), the muscle. Mild-to-major spoilers follow.

I didn’t understand much about the technical aspects of their project, but it doesn’t matter. Spare Parts is a winning underdog story because of its characters, whose development eschews caricature and stereotypes. Each member of the group has his own set of challenges that make for compelling drama, especially since there aren’t many films about the lived experiences of undocumented child immigrants. Oscar is so ashamed that his path to serving in the US Armed Forces hasn’t panned out that he keeps his rejection from the program and his participation in the club secrets from his mother (Alessandra Rosaldo). When she learns the truth from Oscar’s math teacher Gwen (Marisa Tomei), she confronts Oscar and rightfully points out that, even if the competition grants him opportunities in engineering, no company will hire him without his “papers.” Throughout the film, Oscar lives in fear that the ICE (Immigration and Customs Enforcement) will detain and deport him and his family. After receiving a tip from the recruiter, he avoids returning to his family’s house, afraid that he will never be able to go home again. He also breaks up with his girlfriend, Karla (Alexis PenaVega), believing that his undocumented status is a burden, an impediment to their living peacefully.

Cristian appears to be the only man in his house, and he longs to attend a father-son science program with Dr. Cameron. It’s heartbreaking when Dr. Cameron declines, unsure of himself as a father figure. The greatest obstacle to Cristian achieving success, however, is poverty. His family is dirt poor, and he lives alone in an unheated shed outside of the family’s trailer. We do not glimpse his living situation until halfway through the film, because the home lives of Oscar and Lorenzo take precedence.

As the older brother of a budding juvenile delinquent born in the United States, it is Lorenzo’s responsibility, per his stern father’s request, to always look out for Ramiro (Ray Aguayo) or to take the blame for any of Ramiro’s misdeeds. The message that Señor Santillan (Esai Morales) is sending to his son is that his own life doesn’t matter—he’s not meant for anything else. The father would rather have Lorenzo deported—separated from the family—than an American-born son with a police record. Dr. Cameron steps in to mediate the conflict growing between Lorenzo and his father after Lorenzo stops Ramiro from robbing a convenience store. When he hears of what has happened, Señor Santillan only cares if Ramiro was arrested (he wasn’t) and resents that Dr. Cameron tried to meddle in his family’s affairs. Like Oscar, Lorenzo must now fend for himself, in fear of deportation (cops or ICE agents saw him leave the scene of the attempted crime) and kicked out of the house for not looking after Ramiro properly. Why Señor Santillan never thinks that it is his responsibility to keep his son out of trouble is beyond me, and why doesn’t Ramiro ever consider that his actions have severe consequences on his father and brother?

Luis, the only US citizen of the four, is the least developed character. A gentle giant, the rest of the group admittedly uses his stature and strength to lift and set down their 100-pound rover into the pool. Luis struggles to understand how people perceive him. He asks his mother if he is stupid or just quiet, and she answers that only he can reveal who he is. Her encouraging riddle flummoxes him, but it is apparent that the group project and the competition’s requirement that all members present on the technology that they used to make their ROV certainly lift Luis’s confidence, thereby proving to himself and everyone else that he is a capable team member.

Spare Parts is smart and poignant, dramatizing certain elements of the true story for socio-political effect. For example, while Cristian and Lorenzo design the proof-of-concept model using the spare parts found in Dr. Cameron’s science lab, Oscar sets out to raise money for critical missing pieces. He solicits funds from local businesses and banks and is repeatedly turned down. Upon witnessing the ease with which servicemen receive a loan, Oscar astutely pulls his uniform out of the closet and successfully obtains $100 to help with the project. This demonstrates that, given individual prejudice and institutionalized racism, sometimes people of color are not taken seriously, as citizens deserving of respect, unless he or she is in uniform. Later in the film, the team drives to a motel where they can test the rover in the pool. But before they begin, fun hijinks ensue as they push Dr. Cameron into the pool. Eventually everyone is in the water, splashing away, being the kids that they really don’t have the privilege of being at home. While no character’s life situation is representative of every undocumented immigrant who arrived in this country as a child, Spare Parts effectively draws out the inherent drama of their situations in order to instill empathy in the audience.

It should be no surprise that Spare Parts is also very funny, given George Lopez’s headlining presence. Once the team arrives in Santa Barbara for the competition, where they enter the college-level contest (Dr. Cameron thinks that if they lose, it’ll be a greater accomplishment to come in last among the likes of MIT and Stanford), they discover that their waterproof case leaks and resolve to find a quick, absorbent solution. Lorenzo suggests using tampons, and watching him build up the courage to ask a woman in the grocery store for help in choosing the right one (no applicator!) is hilarious. According to Davis’s article, this really happened, despite its seeming provenance from a teenage sex comedy.

In fact, Spare Parts ends triumphantly, but not without suspense. Like I said, I don’t really understand all of their techno-speak, but watching them complete the rover’s underwater obstacle course was a nail-biting ordeal. The team impresses the judges with their oral presentation, self-evident mastery of the material, and innovative and spendthrift design. I don’t want to spoil everything for you, so I urge you to check out the film. It may have taken some liberties with the original story, but as an inspirational teacher/coach movie, Spare Parts blazes a new trail and winningly focuses on the realistic trials and tribulations of the students.