Yesterday, the U.S. Supreme Court ruled 5 to 4 that President Obama’s Patient Protection and Affordable Care Act of 2010 is in fact constitutional, thereby cementing his legacy. I was so excited to hear this news, as it will ensure that millions of presently uninsured Americans will get the affordable healthcare that they rightly deserve. Yep, the country is starting to look a little different, the future a little brighter, after June 28th.

But this probably has more to do with the fact that today marks the premiere in theaters of Steven Soderbergh’s Magic Mike (2012), which is being hyped as possibly the greatest male stripper movie ever made. (Have we forgotten all about Peter Cattaneo’s sleeper hit The Full Monty, from 1997?) The movie review aggregator site Rotten Tomatoes lists Magic Mike‘s rating as 82% fresh. Despite the cheesy marketing ploys–one of which saw star Channing Tatum, whose own experience as a stripper inspired the story, lead a flash mob during his Today Show appearance–it looks as if Magic Mike might be more than just the sum of its “beefcake” parts. This is important, for how else am I going to convince my dad to take me to see it? (I don’t drive, and I live nowhere near a theater, if you can believe it.) Apparently, the fact that serious auteur Steven Soderbergh directed it isn’t enough of a reason. But it should be.

Here’s why: this week, in anticipation of the film’s release, I kept thinking about what would influence Soderbergh to pursue this kind of project. He’s hardly ever made anything as campy; the Ocean’s Eleven trilogy (2001, 2004, 2007) is fun because the biggest movie stars in the world gamely make fun of themselves, all while strutting around in impeccably tailored clothes, in beautiful locales, to David Holmes’s smooth and funky score. Come to think of it, that doesn’t sound too dissimilar from his newest effort.

On a more serious note, what I recognized while going through Soderbergh’s filmography is that most of his films are concerned with the characters’ professional work. This is not to say that he is Ken Loach, who has made many films about working class British men’s work lives. I’m thinking of The Gamekeeper (1980), Riff-Raff (1991), and The Navigators (2001) in particular, not to mention his films about nationalist revolutions (Land and Freedom, 1995; The Wind That Shakes the Barley, 2006) and even U.S. labor unions (Bread and Roses, 2000).

But work in Soderbergh’s movies is more nuanced than in your average film, if the average film is now either a romantic comedy (in which the female lead inevitably works at a women’s fashion and lifestyle magazine) or an actioner along the lines of Die Hard (John McTiernan, 1988), in which a police officer successfully foils a terrorist’s plot, but not without a few explosions going off to highlight just how extraordinary his dayjob is. The point is that, sure, what the characters do for a living is important to the story in virtually all films, including ones in which the protagonist does not work. There’s usually a reason for that.

But consider this: Soderbergh’s first feature after the Cannes success sex, lies, and videotape. (1989) was Kafka (1991). I haven’t seen the film, but I can imagine that, given the author’s biography (his writing provided an escape from his hum-drum workaday life as a clerk for an insurance company), work is not just an important facet of Kafka’s identity, but also a setting much explored in the film.

Arguably his first studio film, Out of Sight (1998) centers in part on the romantic entanglement of a US Marshall (Jennifer Lopez as Karen Sisco) and bank robber-turned-prison escapee Jack Foley (George Clooney in a star-making turn), thereby subverting the narrative conceit of the pursuit that is essential to her line of work. The year 2000’s Erin Brockovich famously transformed Julia Roberts into a Best Actress Oscar winner for her portrayal of a real-life legal clerk and environmental activist. The film chronicles Brockovich’s investigation of Pacific Gas & Electric Company’s cover-up of groundwater contamination in a local community whose residents have become gravely ill. Her efforts take a toll on her relationships with her family and boyfriend, and she also confronts death threats because of what she has uncovered.

Based on a British TV series from 1989, Traffic, also from 2000, takes a more dynamic approach to its inside story of the illegal drug trade: through the interweaving perspectives of a Mexican police officer battling widespread corruption in his force, a conservative American judge/politician whose own daughter is an addict, and the wife of a drug lord going to extremes to protect her family from the law and the cartel. Again, this film, for which Soderbergh won the Oscar for Best Director, would not work without an emphasis on the conflict between each character’s personal and professional lives.

Last year’s underrated Contagion (2011) takes a similar multi-perspective approach to the recounting of a mysterious virus’s spread across the globe. Matt Damon’s part as a new widower, immune to infection, trying to keep his teenage daughter safe may have a pathetic advantage when you consider that the other story lines revolve around the work lives of scientists and public health officials. However, Contagion is compelling, both as a horror film and thriller, precisely because we see these people at work: epidemiologists trying to contain the virus (Kate Winslet) or investigating its point of origin (Marion Cotillard), the head of the Centers for Disease Control and Prevention (Laurence Fishburne) juggling the supervision of others’ tasks as well as being the face of an organization mired in controversy, and a CDC scientist (Jennifer Ehle) toiling away in the lab in order to develop a vaccine. In the end, we understand that business travel is the reason it immediately spread from Macau, near Hong Kong, to places as far-flung as the Minneapolis suburbs and Paris (if I’m not mistaken). Global business and culture are conduits through which more than just money, goods, and services are transferred. 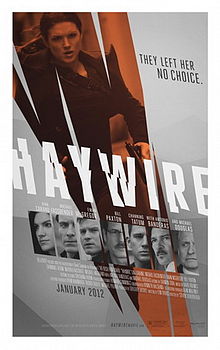 Even Soderbergh’s more experimental, low-budget features explore the world of work. The improvised Bubble (2005) stars non-professional actors in a murder mystery set in a depressed town’s doll factory. The porn actress Sasha Grey takes top-billing in The Girlfriend Experience (2009) as a NYC high-end call girl who specializes in providing clients with the titular fetish. I would even argue, alongside LA Weekly film critic Karina Longworth, that this past January’s release, Haywire (2011), fits into this category of Soderbergh’s ouevre. He built a film around the mixed martial artist Gina Carano, casting her as a double-crossed secret agent/assassin hell-bent on exacting revenge against her employer and one-time lover (Ewan McGregor). Carano’s body and the way she uses it, effectively propelling the action around the world, is a piece of performance art. She does all her own stunts, and much of the story is communicated through her victorious hand-to-hand fights with men like Channing Tatum, Michael Fassbender, and McGregor. In other words, we see Carano’s Mallory Kane excel at work despite the unfair treatment she endures in the workplace.

The director, who, I might add also serves as the cinematographer on his pictures, under the pseudonym Peter Andrews (is that gesture meant to hide his work or call attention to it?), has also made films about the actor and writer Spalding Gray: 1996’s Gray’s Anatomy and And Everything Is Going Fine (2010). The first is more accurately a filmed monologue, essentially capturing Gray at work as the performer of staged autobiographical storytelling, whereas the second is a more conventional documentary about the life and work of the artist, who allegedly drowned himself in New York’s East River in 2004.

The theme of work pops up in Soderbergh’s other films, including The Informant! (2009), Che (2008), and Solaris (2002). Even his foray into television, alongside oft-collaborator and co-producer George Clooney, K Street (2003), concerns the work of lobbyists and politicians. This is nothing to say of the projects that he has worked on as just a producer. Unscripted (2005), for instance, follows three real actors around Los Angeles as they scramble to book gigs and catch their big break.

Thus, it is not so strange to see that Steven Soderbergh, who has just renewed fears that he’s quitting movie-making forever, again, has directed a film about male strippers and how the world they inhabit at work dictates how they perceive and are perceived by those outside of it. From the first trailer, it appears as if Magic Mike (Channing Tatum) has aspirations of a career in furniture design. Interesting, eh? Anyway, his co-worker and friend (Alex Pettyfer) has a sister (Cody Horn) who’s made it her mission to get the guys out of the heavily exploitative business. The actress recently acknowledged that her character might be unpopular with female audiences, but that she reveled in watching the guys, including Matthew McConaughey in “the role he was born to play,” act and dance in g-strings while on the set. Since I am interested in cinematic representations of the male body’s desirability–in an academic sense, I swear!–and how audiences, men and women alike, read these images, I have been following coverage of Magic Mike pretty closely, and from the get-go I found it intriguing that Soderbergh would tackle this subject, but now I understand that it’s all about the work.